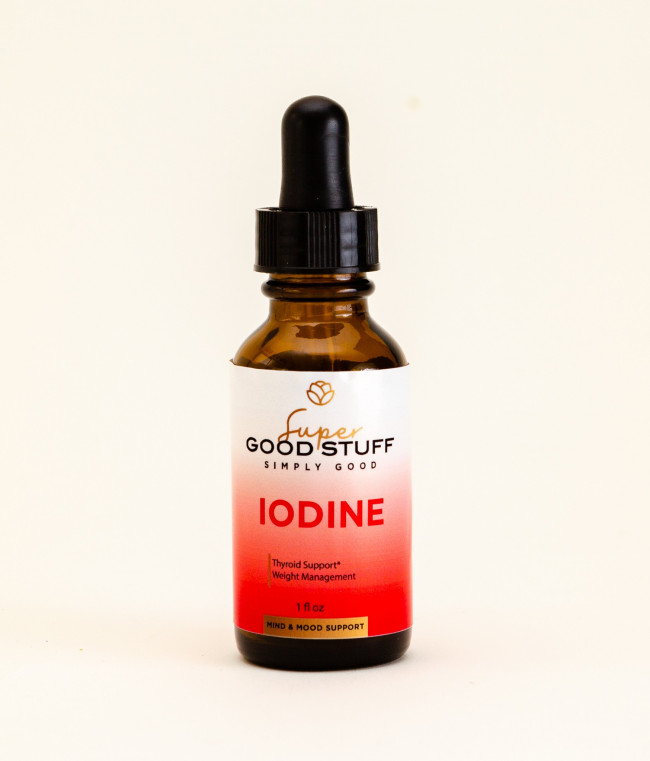 (8 reviews)
In stock
$20.00
A source of balanced Iodine is a critical dietary component. Super Good Stuff’s Iodine formula has been recognized by many nutritionally aware doctors and health food stores.
Add to cart
Fast Delivery
High Quality
Made in California
Cruelty Free
About Product

The use of iodized salt has limitations. Certain iodides are not well tolerated by everyone. Too much potassium or sodium iodide can potentially produce toxic reactions, such as heart palpitations, skin rashes, and stomach disturbances. Excess potassium or sodium iodide can depress the thyroid as well as disrupt the body's delicate electrical balance.

Super Good Stuff’s Iodine is made from nontoxic, water soluble iodine, ammonium iodide and USP vegetarian glycerin, and is easily absorbed and assimilated into the body.

More about this product

If you’re looking to truly promote total body health, a source of balanced Iodine is a critical dietary component. Super Good Stuff’s Iodine formula has been recognized by many nutritionally aware doctors and health food stores, and is well known for:

Iodine Depletion in the U.S.

Iodine, along with other trace minerals, once had a natural system to supply and replenish the soil of the earth. Wind carried iodine over the earth from the ocean, and rain deposited the iodine and other trace minerals into the soil. There they were absorbed, providing nourishment to the plants that grew in the soil, the animals that ate these plants, and ultimately to humans, whose diet included both plants and animal products.

However, the amount of iodine in the diet varied depending upon the amount absorbed by the soil. As far back as the early 1900s, wind-borne iodine was depleted by the time it reached the mid-United States. This region became known as the Goiter Belt, forcing the U.S. government to promote iodine as an essential nutrient to be added to milk and, ultimately, salt.

What's in this product?
Iodine
Vegetable Glycerine
Ammonium Iodide
Customers have also bought
Blogs
Don't take our word for it